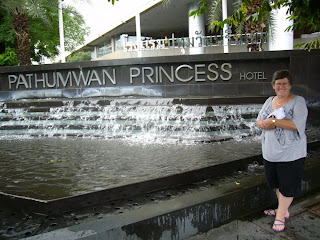 Front of our hotel in Bangkok 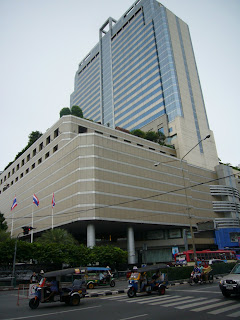 29 floors in our hotel 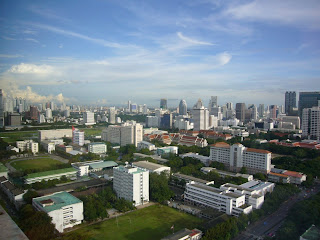 View from our hotel window 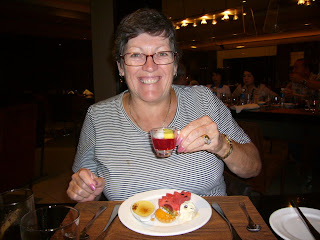 Lyn having dinner at a Thai restaurant. After all we are in Thailand. 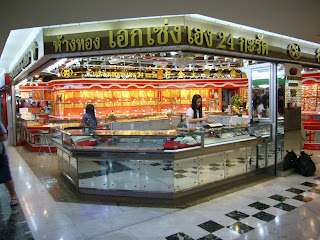 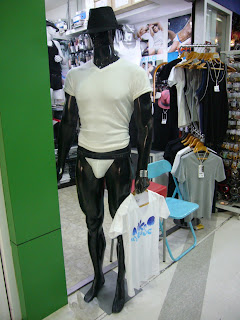 
We were woken at 6.45am this morning to the wonderful news that Lyn and Mick had become grandparents again to a little boy named Carter Aston West. Weighing in at 7lb 12oz and 50cms. Both Mum and baby are doing fine. Congratulations to our lovely son Simon and his beautiful wife Michelle and our gorgeous grandson Lincoln.

The sun is shining and we had a heavy dew overnight here in Newcastle-under-Lyme.

This was our last day in the UK today after 4 hectic months touring.

We drove into the Thomas Cook shop in Newcastle-under-Lyme to pick up our Thai (Baht) currency so we would have some spending money whilst in Thailand, our next stop. Also Mick needed a haircut.

Afterwards, as we had some time to spare, we took Roy and Davina to have coffee at Trentham Gardens which have a café next to some lovely Italian Gardens. We also did a bit of shopping whilst there to make absolutely sure we were overweight on the aircraft!

We decided to leave for Manchester airport early to give ourselves plenty of time for check-in etc, as you never know what is going to happen on the British roads.

That turned out to be a good move as before we left Davina checked the BBC road reports, which is very up to date on the BBC Red Button (a sort of Teletext) and found that the main motorway to Manchester (M6) was closed due to an accident. This mucked up the plans we had made to take the A34 instead, as all the motorway traffic would be using it.

Roy said that if the M6 was closed then the A34 would be choked, so he kindly said he would lead us around the chaos in his car otherwise we would not make Manchester Airport in time.

Apart from a few delays this worked very well and having cleared the worst of the traffic, Roy headed home and left us to finish the very eventful trip.

We got to the Airport at about 4.30pm having left at about 1.15pm for what should have been a 50 minute trip.

The first thing we had to do was return the car to Hertz, as it had to be back by 5pm. When we got there the Hertz mechanic gave it the all clear and we took the docket to the counter to find they had charged us an extra £130 ($208). Mick queried this and asked what it was for. After a lot of phone calls they decided it was a computer error. The next problem was though that our credit card had already been debited by that amount and if Mick hadn’t noticed it, imagine the difficulty we would have had getting it back from Australia.

Anyway they assured us that the money would be credited back to our credit card and Mick got it in writing.

We then headed off through security to await our flight as we had already checked in on the Internet.

We were served a very nice Beef Stroganoff followed by dessert and Swiss Chocolate and Mick had a couple of glasses of white wine. He normally would only have one glass but they filled it up again before he could stop them!

When we arrived in Zurich we had to go through the security screening again and Lyn got a bit annoyed with the security people in Zurich as they insisted on emptying our backpack having run it through their x-ray machine twice and didn’t like what they saw. Mick had to tell her to calm down as he could tell they were becoming unhappy with her attitude. She walked away and allowed Mick deal with the situation in his usual calm manner.

Strangely enough we had also had problems with the Zurich security people when we came through on our way to the UK when they told us off for having 3 clear plastic bags for our liquid stuff instead of 1.

The Swissair plane which took us to Bangkok was a big 4 engine Airbus A340 but unfortunately it was the same type as we encountered on our inbound leg to Zurich and the bed conversion on type business class seats were awful.

We took off on time at 2255 and as Mick had expected, they came round with a dinner menu fit for a 5 star restaurant. Unfortunately, we had just had dinner on the Manchester to Zurich flight so we decided to have a small snack before settling down for the night. Mick also had a Tawny Port!

We both had a night with not much sleep, as although not rough, the flight was not as smooth as it could have been and the ‘beds’ were not very comfortable.

Ninety minutes before landing the crew turned night into day by opening the window blinds for us to have breakfast which was very nice.

The plane landed in Bangkok on time and as we were business class passengers we were fast tracked through Bangkok airport and the hotel transport was there to whisk us off to our hotel. Well not quite whisk as it took about an hour to get to the hotel and most of it, apart from the traffic jams in the city, was 110kph on a motorway.

The Pathumwan Princess 4 star hotel did not disappoint and we had a room on the 27th floor with fantastic views overlooking the city. Mick was unhappy that we didn’t have free WiFi though as the hotel was not cheap and we needed to do the blog!

We booked a couple of tours for the next day and went for dinner in the restaurant which was attached to the hotel as we were too buggered to go out and find anything else. That, combined with the fact that it was like an oven outside with the warm weather (29c) combined with the showers. (Like a sauna actually.)

After an excellent but expensive Thai meal (1850 Baht, about $70 which included a 25% discount) we walked through the hotel lobby to an enormous 7 floor shopping centre called the MBK and shopped till we dropped.
Posted by thewests at 1:14 AM