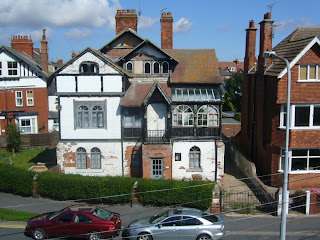 View from our unit to the worst looking house in the street! 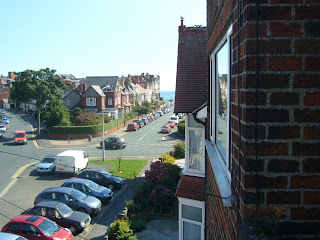 View right from our unit - lean out and we can see the sea! 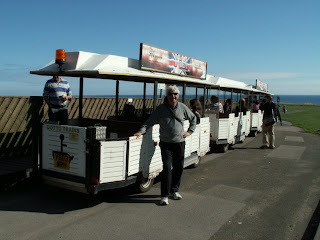 Land train along the seafront 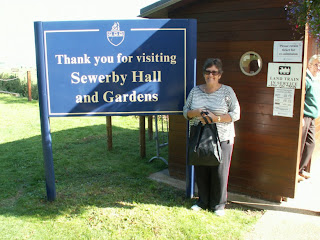 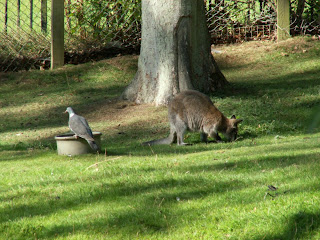 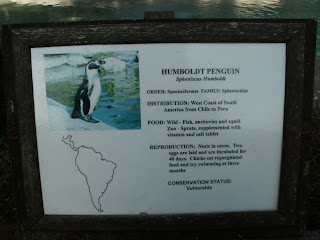 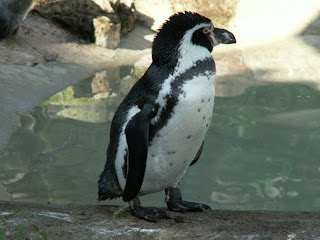 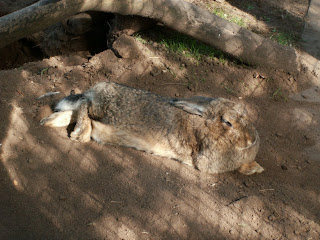 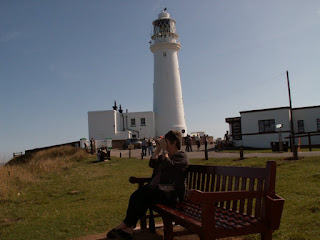 Lyn looking out over the sea from Flamborough Head 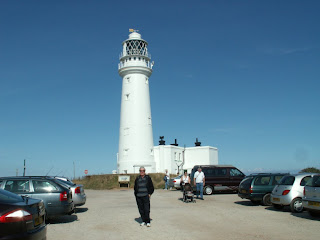 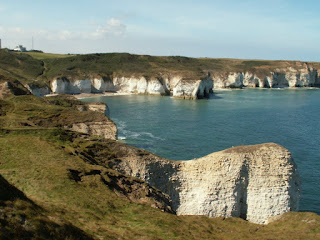 View of Chalk cliffs off Flamborough 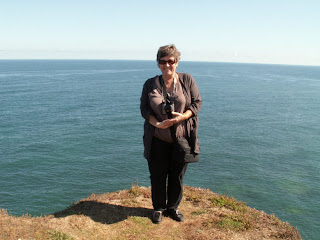 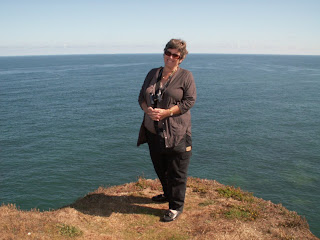 Today we visited Sewerby Hall and Gardens in Bridlington which is about 10 minutes by road from our unit. It is one of the East Riding's most popular tourist attractions. The hall is a Grade I listed building and is home to the Museum of East Yorkshire, and includes a room dedicated to the aviator, Amy Johnson.

The hall had many rooms which had nothing in them at all so it was a bit disappointing but the Amy Johnson room was quite interesting.

Amy Johnson achieved worldwide recognition when, in 1930, she became the first woman to fly solo from Britain, to Australia.

She was born in Kingston upon Hull which we visited a few weeks ago and was killed on 5 January 1941, while flying an Airspeed Oxford from Blackpool to RAF Kidlington near Oxford. She went off course in poor weather and drowned after bailing out into the Thames Estuary. Although she was seen alive in the water, a rescue attempt failed and her body was never recovered. We saw a leather bag in the museum with the initials AJ on it which was thrown from the plane when it crashed. There is some disagreement as to exactly what happened to cause the crash.

In the grounds of Sewerby is a small zoo, which had a variety of animals and birds and some Wallabies, which the locals enjoy.

We travelled to and from Sewerby by a cute little train that runs along the seafront here.

The area is known for it's seabirds such as gannets and puffins, which breed abundantly on the cliffs. The nearby Bempton Cliffs is a Royal Society for the Protection of Birds (RSPB) reserve.

Because it projects into the sea, Flamborough attracts many bird migrants in autumn and also is a key point for observing passing seabirds. Things were a bit quiet whilst we were there though with mostly Herring Gulls and Pigeons flying about.

There were quite a few birdwatchers there and we saw a Kestrel, a bird which apparently is a recent arrival.

Apparently, when the wind is in the east, many birdwatchers look for seabirds from below the lighthouse, or later in the autumn comb the hedges and valleys for land bird migrants. Flamborough Head also has a bird observatory.

The Flamborough Head lighthouse area is the oldest lighthouse place in Britain, dating back to 1674.

It was lovely there today. The sun was shining and there was a tiny sea breeze so we sat quietly at several of the excellent vantage points watching the sea and the world go by for as long as the parking fee lasted.

When we got back to the car after about 2 hours, the Council Parking Inspector was busy in the car park but as law-abiding visitors, we were back to our car with 2 minutes to spare on the voucher.

We then grabbed copies of the Daily Mail and The Times and went home for some quiet reading. The papers seem to be predicting a minority government (Labour) in Australia with Independent and Green support. I guess that now depends on the decision of the triumvirate of Independents headed by Bob Katter. Did you know he pelted the Beatles with eggs in 1964?

Burghley (pronounced Burley) Horse Trials are on here in the UK at the moment. But I guess you all knew that. Gloria would, wouldn’t she? There are a lot of Australians competing.
Posted by thewests at 11:13 AM