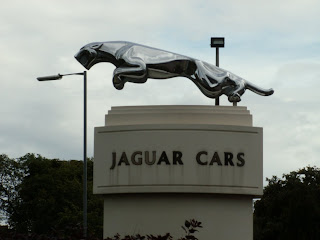 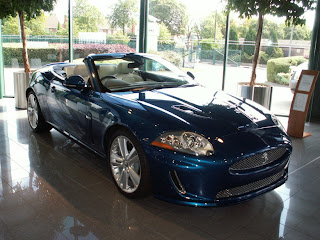 Today we took a guided tour of the Jaguar Manufacturing Plant in Castle Bromwich just east of Birmingham.

The factory had a well laid out and welcoming visitors centre which had a showroom displaying the 3 models of Jaguar currently made in the factory. These are the XF, XJ sedans and the XK 2 door which comes with either a soft top or a coupe body with a fixed roof.

There is also a reception desk, small open theatre in the display area and a very nice gift shop containing all the Jaguar stuff one would expect.

The tour started with a 10 minute video of what might be called Jaguar propaganda before we (there were only 5 of us, 4 of whom were from Canberra!) were taken in a mini-bus to the factory entrance.

They have 1 very large building for each of the models built so they usually choose one of the models to concentrate on depending on the preference of the group. The Dutch guy was particularly interested in the XK which we thought wasn’t a bad choice as it’s a fabulous looking sports car.

We entered the amazingly clean factory and the guide (a retired factory manager) started with a few minute talk on the models made and the facts and figures of production. It takes 53 hours to build 1 XK and they produce about 200 per week. Mick should have taken notes as there was a mass of facts and figures. The other models come off the production line at a faster rate.

Except for the XF, the 'cheapest' Jag, the body structure of the others is made completely from aluminium. This reduces the weight of the vehicle significantly and therefore improves the power to weight ratio. The XF only has an aluminium bonnet.

After pressing the body panels in another building, the bodies are assembled almost entirely by robots. The robots use rivets to join the 3 aluminium body sections base panels as opposed to spot welding which is used on steel bodied cars.

We watched in amazement as the 3 sections which make up the base of the body were picked up individually and placed by the robot on a jig which them replaced it’s lifting head by a glueing head which laid sealant on the places where seams would be before replacing it’s glueing head with a riveting head and riveting the whole lot together.

No people are involved in the body making process and we could have sat and watched it for hours. It was very addictive and Lyn was absolutely fascinated by it.

We spent 2 hours walking through the factory viewing the building process, some of which obviously involved workers who worked on a very slow moving floor, installing such things as the dashboards, interiors, drive trains and wheels etc. Each section of workers had 12 minutes to complete their part of the process before moving back to the next vehicle.

The production line contained all different colours and configurations which have all been ordered already. No vehicles are made without an order and if you put an order in at your local dealer, you can attend the factory and watch it being assembled.
There were a mix of left and right hand drive vehicles on the line depending on which country the car had been ordered from. By far the largest customer for the Jaguar is the good ole USA.

After the assembly is completed, the cars undergo a water seal test, a wind noise test and a 60mph run on a static road (like dyno wheels). Also 1 in 25 is taken out on the road for a test.

Since all cars have been pre-purchased, they don’t need any storage at the factory. They load them onto rail cars at the factory and ship them to the rail head for onforwarding to their destination at the end of the assembly and test process.

The XK costs £70,000 in the U.K. It’s almost worth ordering one, coming over here for 12 months then driving it around for a year and then taking it back to Aus. Mick would have to check the current import duty/tax arrangements first!

Very impressed with the tour, we headed off down the A38 , joined the M6 Toll and subsequently the M6 to Newcastle-under-Lyme to stay with Mick’s cousin Davina and her husband Roy, to prepare for our flights home.