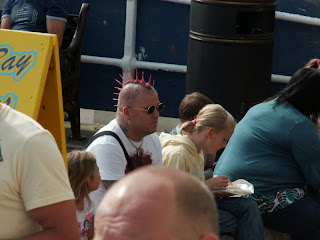 What an idiot. This guy had a wife and daughter with him and was sitting on the sea front at Bridlington eating an ice cream. 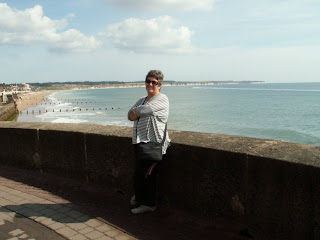 Lyn on the seafront at Bridlington 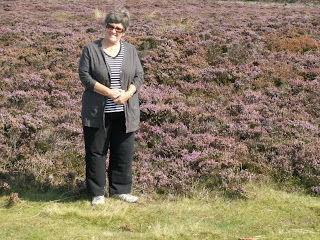 Lyn amongst the heather on the North York Moor 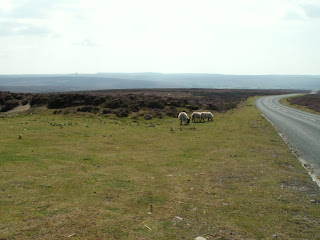 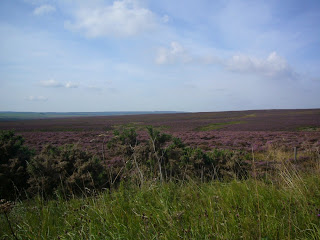 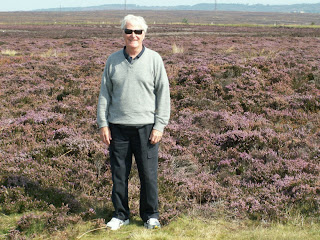 Mick on the North York Moor 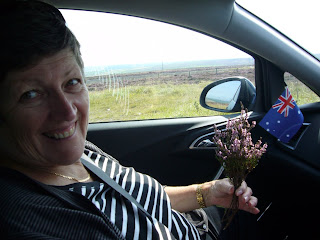 Lyn with some Heather from the North York Moor 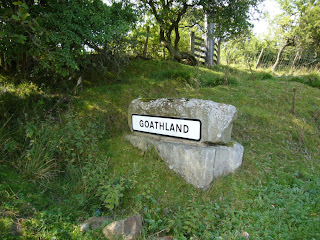 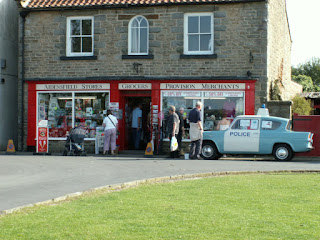 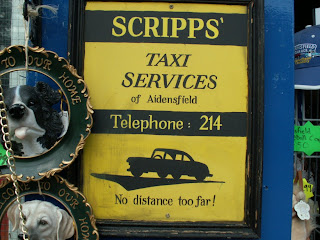 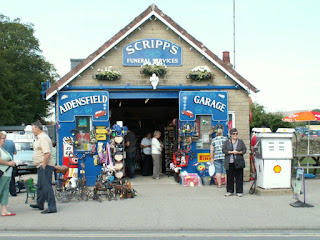 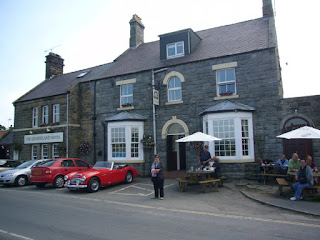 Lyn outside the Adensfield Arms 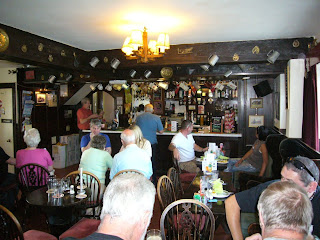 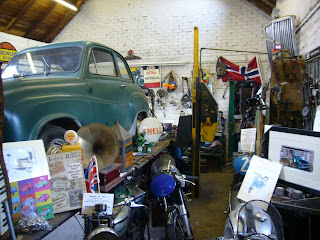 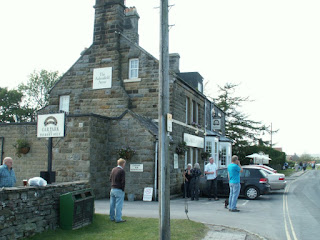 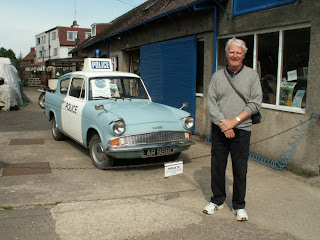 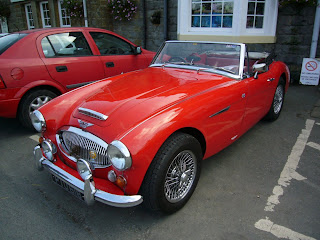 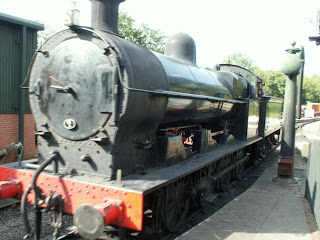 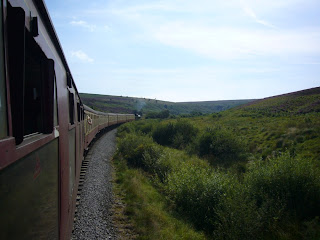 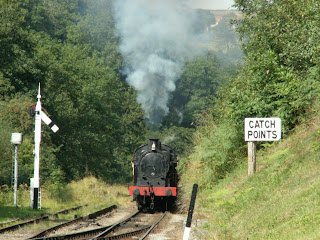 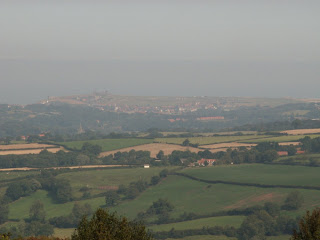 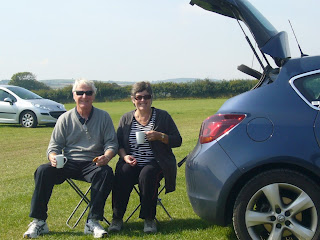 Mick and Lyn having coffee parked at a car boot sale 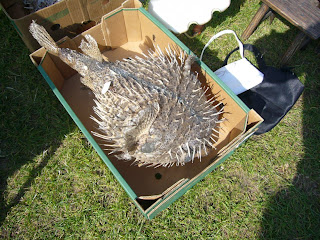 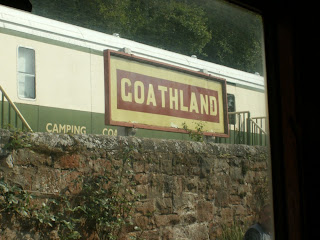 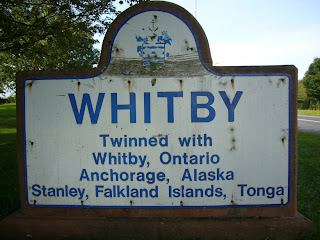 
Today we decided to go to Whitby and Goathland so we headed off down the A165 from Bridlington towards Scarborough. Scarborough is a major holiday destination for UK residents which was a good reason for us to avoid it. Since we were still at the tail end of the school holidays there were still a good number of stragglers in the town so it took a bit of traffic negotiating before we finally made it out the other side onto the A171 to Whitby.

On the way to Whitby we came across a large Car Boot Sale (Trash and Treasure) in a field so stopped to have a look. There were lots of Thomas the Tank Engine and Bob the Builder stuff that Lyn wanted to buy for Lincoln but unfortunately due to space/weight limitations we left, almost, empty handed. The strange looking creature with spines was for sale for £55. Mick thought it was a Puffer fish or Blowfish which are eaten in Japan but are deadly poisonous and must be prepared by a highly trained cook.

Unfortunately Whitby was still in the grip of holidaymakers so after a quick look at the full car parks we headed out of the town still on the A171 and then turned right down the A169 to Goathland.

We passed through the North Yorkshire Moors and some beautiful countryside on the way and the heather was in full bloom.

Goathland as a very small town with nothing much to offer in the way of tourist landmarks except that it is known to most people as Aidensfield, where the TV series Heartbeat is made. Consequently everyone wants to go there to check it out and take pictures.

The local council decided there was money to be made so declared most of the village a no parking area except for their car park which cost £2.40 for the pleasure of parking. There was a car park at the Goathland Hotel, sorry Aidensfield Arms, but it was patrons only and the pub was very well patronized doing a roaring lunchtime trade.

Mick went inside to say hello to Gina and the Publican, retired police sergeant Oscar Blaketon but it must have been their lunch break as there were some stand ins serving behind the bar.

We went into Bernie Scripps garage which had been turned into a souvenir/gift shop but there were still a few old cars and motor bikes in for repair including an Austin A35 like Mick’s Dad used to own. Bernie was on holidays as well unfortunately. The Aidensfield Police Car was parked outside but no sign of Alf Ventress either.

We took some pictures and then walked down to the railway station where we bought return tickets on the steam train service to Pickering so we could have a look at another quaint town in North Yorkshire.

Unfortunately the train was appropriately late (weren’t they always in those days) so by the time we got there, the return service was about to leave (it was the same train!) so we had no time to look at the town. We could have waited for a later service but we had to be back in Bridlington for dinner with our hosts at 6pm.

We saw quite bit of wildlife including pheasants on the train journey which was through some lovely countryside.

(We were pleased that the Eurostar service to Paris on which we travelled wasn’t using these engines, as the soot coming in the windows was bad enough without us being inside a tunnel under the channel. And imagine, the London tube trains used to be powered by steam engines with coal-fired boilers in the early days.)

After returning to the Goathland Station we decided to travel home via a different route to avoid the very busy towns of Whitby and Scarborough. We continued down the “B” road from Goathland and joined the A169 further south, deep in the North York Moors. We then continued down the A169 to Pickering, turned east onto the A170 and then cut through to the A64 by one of the back roads that link them. We then continued on the A64 towards Filey before turning south on the A165 to Bridlington.

One thing that spoiled the day somewhat was the smoke in the air which is unusual over here (common in Aus though) due to a peat fire on Thorne Moor, near Goole. It has just been on the news that 150 acres have been destroyed so far on the 5000 acre Moorland. The otherwise fantastic views were shrouded with a bad smoke haze all day.

Also on the news tonight some stores are moaning that Polo mints being made in Indonesia are being sold at Pound World which is a sort of Reject Shop here. They are also made in York and the York made ones cost 44p a pack whereas Pound World, where everything costs £1, is selling 6 packets for £1 (about 17p per pack). Nothing new about that in Australia.

In the evening we met Roy, Davina and Audrey and we shouted them a nice, mainly lobster, meal at the Sewerby Grange Hotel nearby. Very nice.